In this note, we are updating our LS-1 Utility Solar Model to account for more activity driven by the potential Inflation Reduction Act (IRA) and the bulging backlog of  projects waiting for panels. Altogether, we now see >20 GWac of utility solar being put online in the U.S., up 50% from this year. We also share recent data from our 2Q and July download below.

In this update, we are updating our LS-1 Utility Solar Model to account for Q2 activity and expectations following the likely passage of the IRA. For 2022E, our numbers are unchanged at ~13 GWac (17 GWdc), but still well above the only 8.7 GWdc in the June Woodmac / SEIA update. Next year, we are now anticipating roughly 20 GWac (27 GWdc) to be put online – almost double the June Woodmac / SEIA update.

Part of our higher expectations are driven by more activity we have already seen in anticipation of the IRA passing. The other factor driving our big 2023E ramp is the growing backlog of projects under construction.

According to our data (leveraging satellite imagery), we count 19-20 GWac of projects that are currently under construction at the end of July, up 25% from a year ago. Projects under construction have inflected higher in recent months primarily due to 1) delays in getting panels and 2) higher new construction starts in April / May / June. Of the 19 GW under construction, 10 GW has yet to receive any panels.

A key driver of increasing project backlog has been decline in installations. Based on our data, developers installed 30% fewer panels this July compared to a year ago. 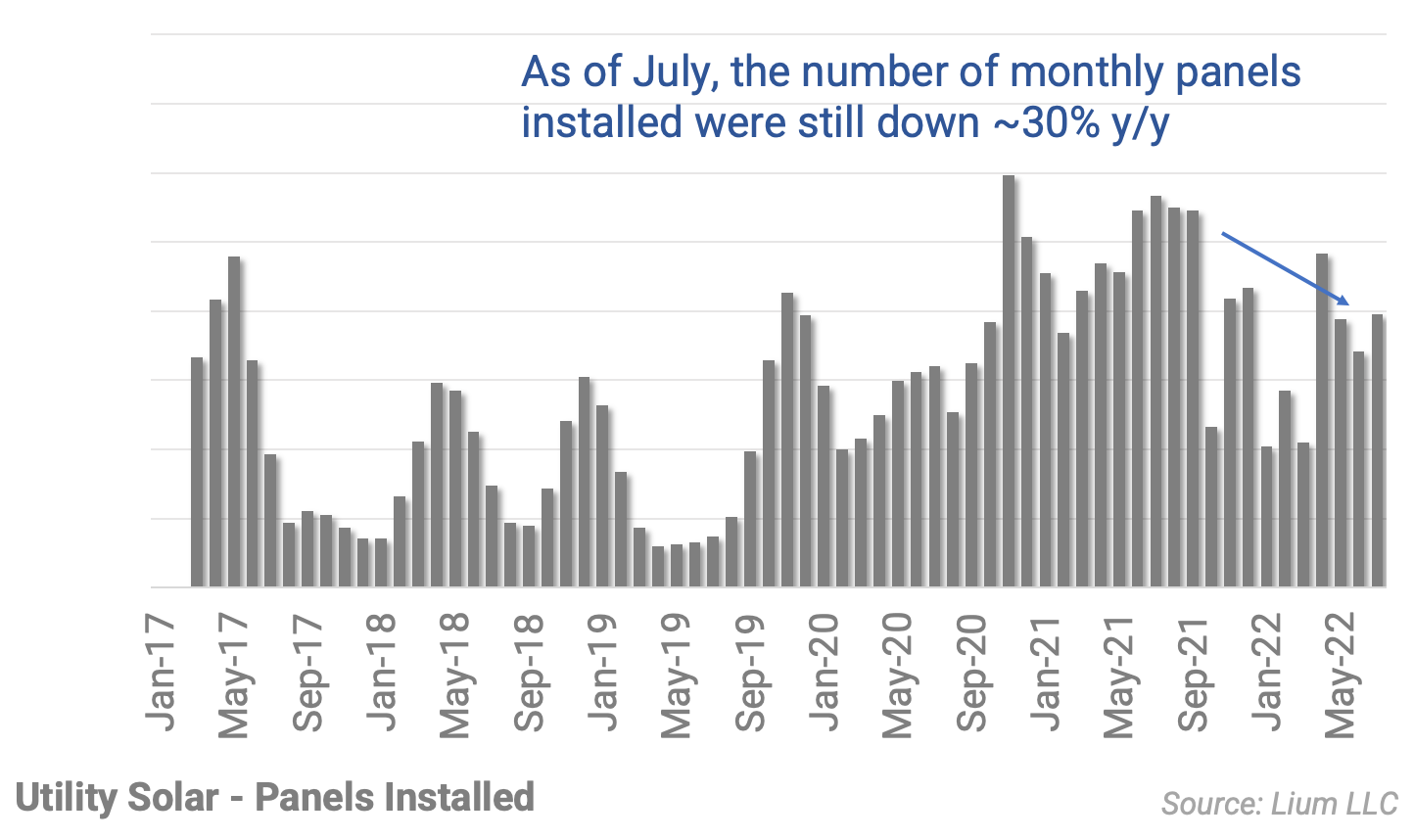 With slow panel procurement, we now count 8 GW of the 19 GW under construction that was delayed as of July. This compares to less than 3 GW a year ago.

According to our data, Invenergy, NEE, and Enel have the most projects currently under delay as of July. Historically, these developers have used a heavy percentage of Chinese panel manufacturers including Longi, Jinko, and Trina.

…While NEE and Leeward Are Most Active Starting New Projects

Despite delays on many projects, NEE has also been the most active in starting new ones. Leeward has also started construction on a number of projects and will likely use FSLR as their panel provider.

Thoughts or Comments? Email Us.